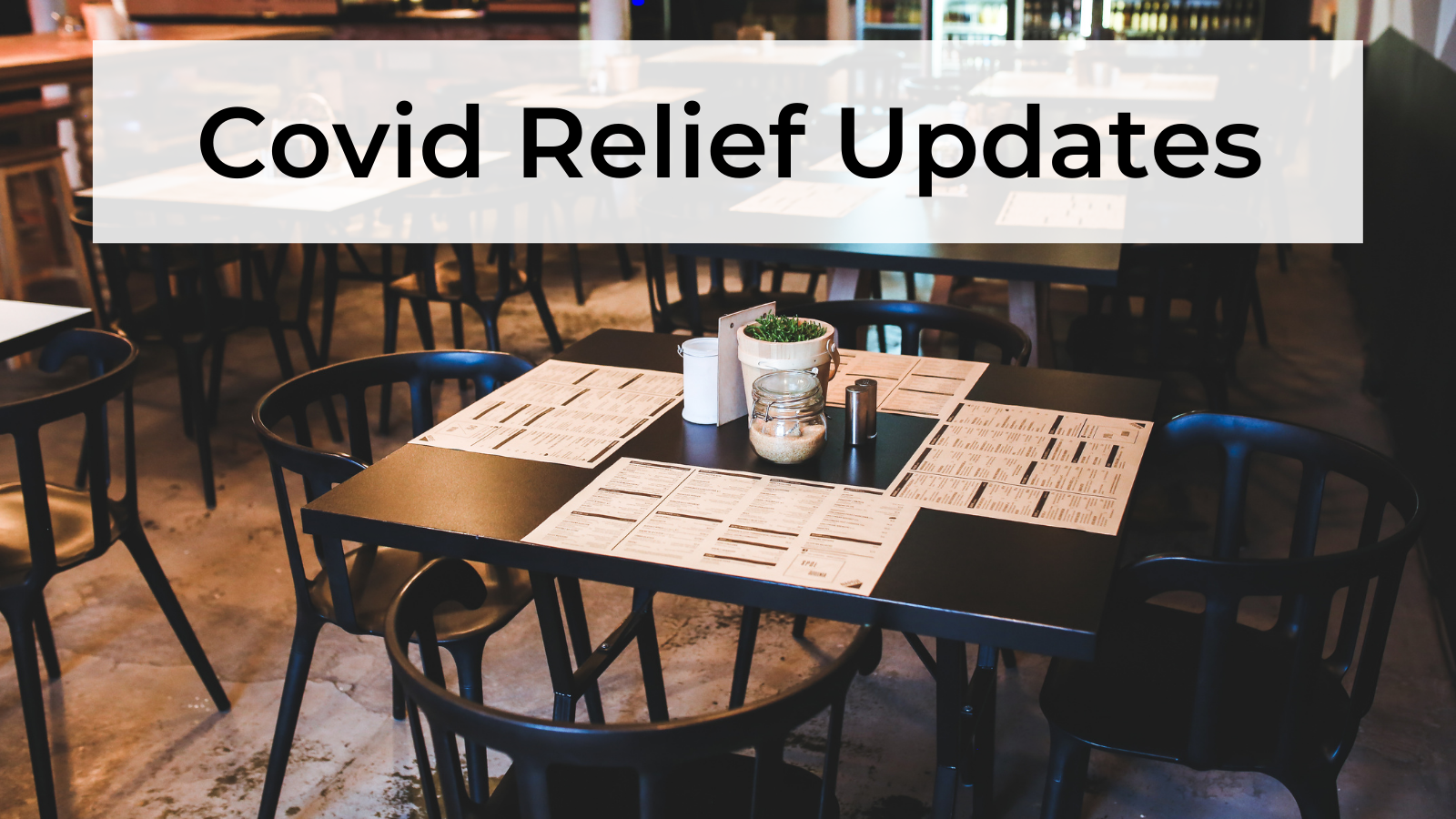 There’s been some changes in the SBA Covid Relief Programs recently. Read below to learn more about these changes and how they might impact your business.

The Paycheck Protection Program (PPP) loan period ended May 31, 2021. Existing borrowers may be eligible for loan forgiveness for all of their PPP loan. Loan forgiveness for both First and Second Draw PPP loans are available if the following criteria is met:

Businesses can apply for loan forgiveness as soon as all the loan proceeds have been used.

Many lenders have signed on to the Direct Forgiveness Portal set up by the SBA to streamline the loan forgiveness process. You can download an Excel spreadsheet HERE to see if your lender has signed up for the Direct Forgiveness Portal. Contact your lender directly for their loan forgiveness program if they have not joined the portal. All businesses applying for forgiveness will have to submit information regarding the use of the PPP loan proceeds they received. You can read more about what documentation you will need to provide HERE.

Note: The deadline to apply for the Shuttered Venue Operators Grant (SVOG) is Friday, August 20, 2021 at 11:59pm Pacific Time. Later in August, those that receive an SVOG will be able to apply for a supplemental grant up to 50% of the original award amount.

The SVOG is available to businesses that support the arts, including venues with live music or performing arts. Businesses that received PPP loans are eligible to apply for the SVOG grant. You can download the Frequently Asked Questions PDF HERE.

Eligible applicants may be able to receive grants up to 45% of their gross earned revenue up to a maximum of $10 million.

The Employee Retention Tax Credit (ERTC) was created as part of the CARES act to encourage employee retention during the COVID-19 pandemic. The ERTC allows qualified business to claim up to 70% of the first $10,000 in pay and health benefits in each quarter for which they qualify.

It has been extended several times and was set to expire December 31, 2021. The current national infrastructure bill that is before Congress now would end the ERTC early, changing the expiration date to September 30, 2021 if the bill passes before then.

Businesses may also apply retroactively for the credit for previous quarters dating back to the beginning of the pandemic. A rule change also allows businesses who received PPP loans to claim the ERTC and can be claimed retroactively as well. In addition, “recovery startup businesses” (being those that opened after February 15, 2020) will still qualify for the ERTC until the end of the year. 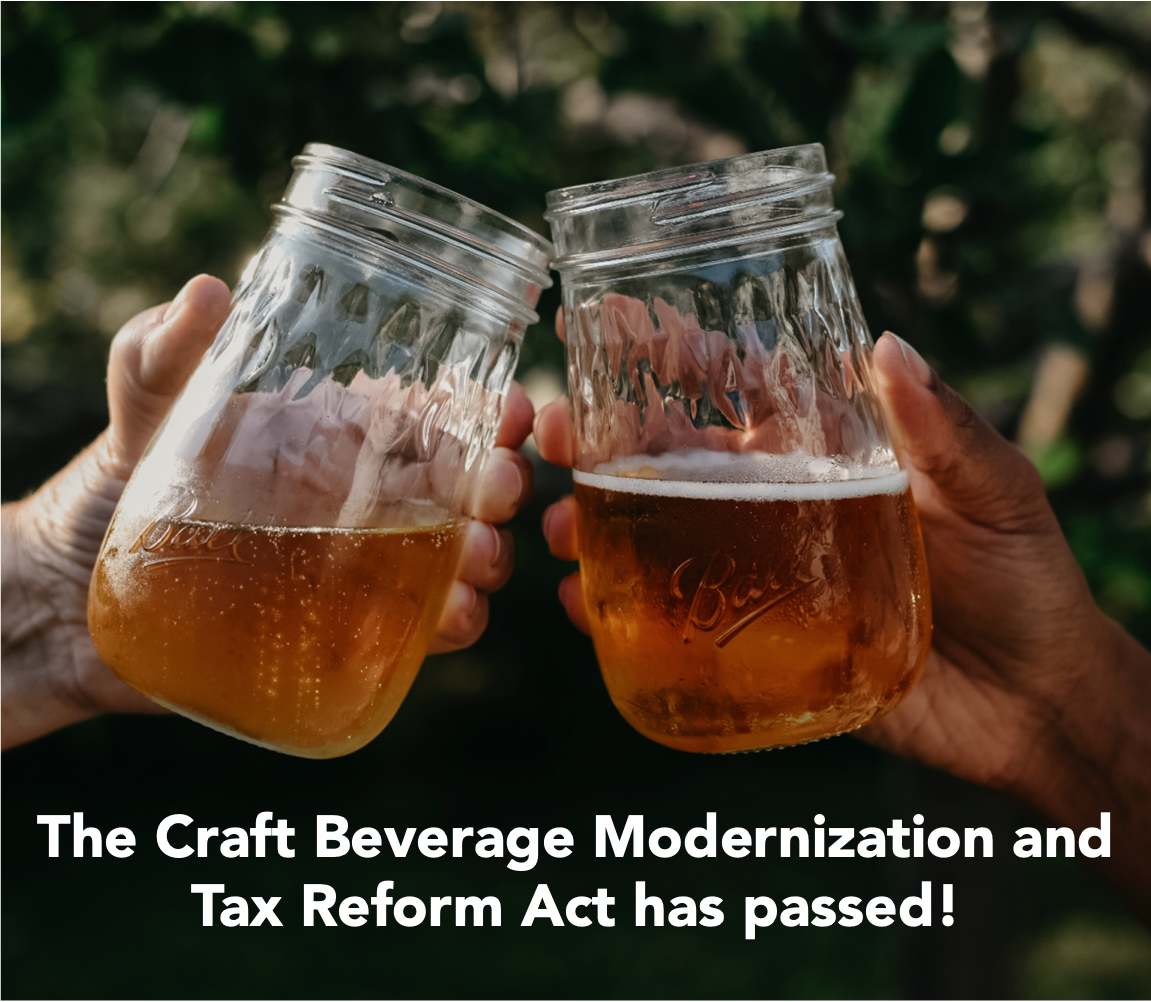 UPDATE: On 12/27/20 President Trump signed the bill making the reform included in the CBMTRA permanent.

On Monday night, Congress took the important step to pass permanent Federal excise tax credits for the nation’s cideries, meaderies, wineries, breweries, and distilleries. The tax reform measures for alcohol producers were originally introduced on a two-year basis in 2017 and renewed for one year late in 2019. The renewal was set to expire on December 31, 2020, but thanks to the inclusion of the Craft Beverage Modernization and Tax Reform Act (CBMTRA) in the most recent COVID relief bill, the excise tax credits are now permanent. The transition from temporary tax bill to permanence was relatively rapid thanks to enormous bipartisan popularity in both the Senate and House of Representatives as well as unprecedented collaboration of cider, wine, beer, spirits, and mead.

The bill removes prior barriers to growth by increasing the defining production threshold of a small cidery or winery and maintaining tiered tax credits as cideries grow and meet those thresholds.

“America’s cidermakers can take a deep breath knowing that not only will their Federal excise taxes not go up on January 1, but the annual cycle of uncertainty regarding those taxes will stay behind with 2020,” said Brooke Glover, vice president of the American Cider Association.

“These tax credits were passed relatively recently, but many new cideries have never known any other way. I’m grateful they aren’t facing a tax increase come January 1. This can provide a bit of much needed confidence to do business in 2021,” said McGrath.

ACA played a supportive role in the craft beverage coalition that lobbied to make the credits permanent.

“Our members have worked hard to host members of Congress at their cideries, visit their offices in DC and participate in collaborative days of action. I was really proud of ACA’s membership,” McGrath said. “We are also extremely grateful to our colleagues in wine, beer, spirits and mead for including us in the beverage coalition.”

The American Cider Association encourages its members to make sure they are taking advantage of these tax credits and to let the ACA know how they are investing the savings. The Association will be rolling out educational resources to explain the nuances of how the CBMTRA benefits cider businesses in the coming weeks.

“Thank you to our members for renewing your membership year after year. Your small annual investment in the ACA has added up to much bigger permanent tax savings for you,” added McGrath. “Cider has a seat at the table. We have increasing numbers of Congressional champions. Our association is working.”

The bill now heads to President Trump for his signature and he is anticipated to sign. In a time when it is desperately needed, the CBMTRA supports jobs, farms and craft manufacturing.

Cideries like yours are facing the harsh economic realities of a global pandemic. Congress needs to be proactive in supporting small businesses like yours right now, but they also need to protect you from further economic harm. In a normal year, raising Federal Excise Taxes could significantly damage our industry’s viability. In 2021, raising taxes could force hundreds of cideries to permanently close their doors. Join us in urging Congress to act urgently and make the Craft Beverage Modernization and Tax Reform Act permanent NOW.

This will impact all segments of the cider industry. It’s critical we work together in reaching out to lawmakers today or come January 1, your Federal Excise Taxes may go up significantly.

Please reach out to Congress today and tell them your business needs a break: Make the Craft Beverage Modernization and Tax Reform Act permanent! 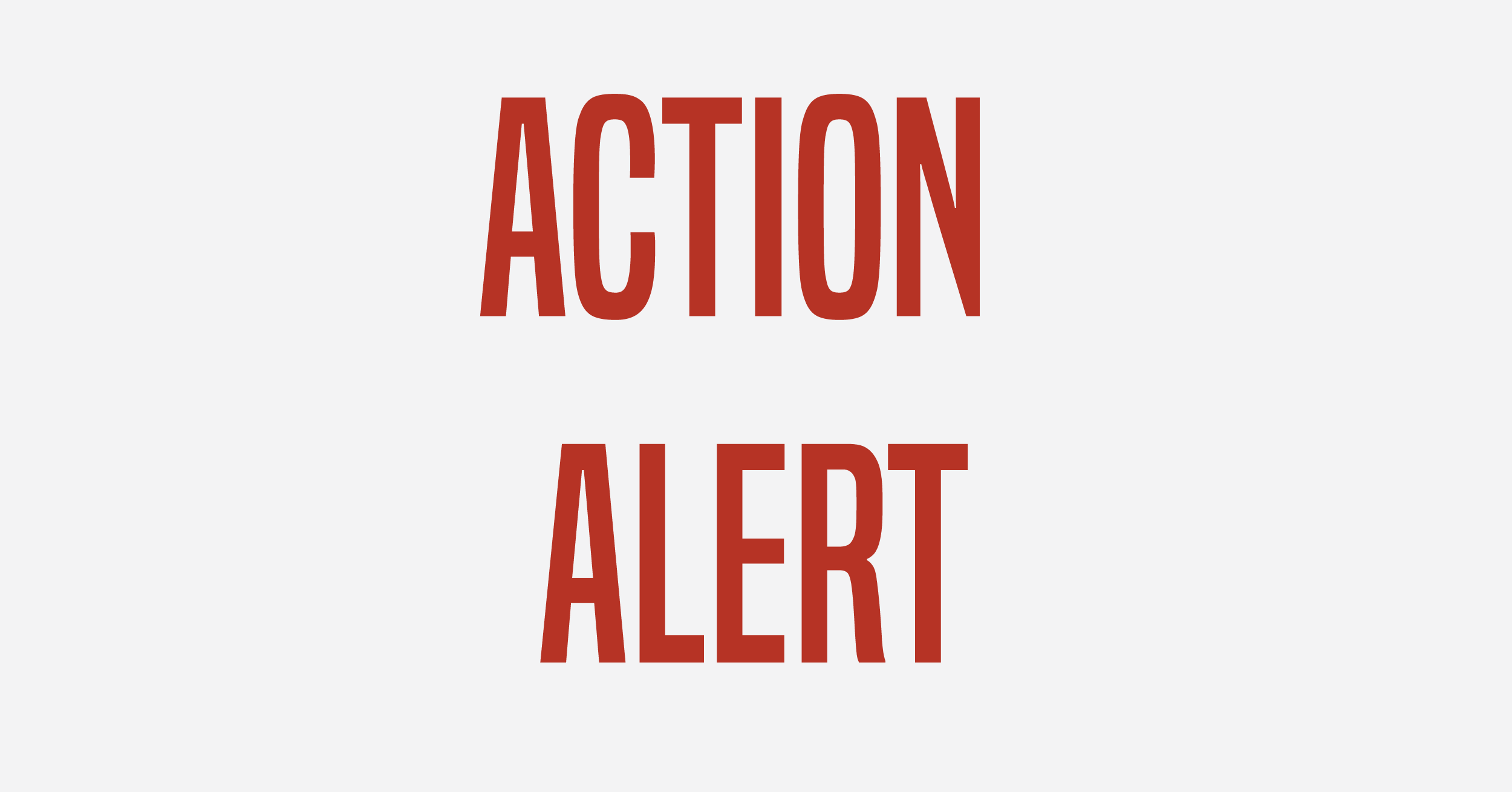 The Craft Beverage Modernization and Tax Reform Act EXPIRES at the end of 2019.

The Craft Beverage Modernization and Tax Reform Act created critical but temporary excise tax credits for beer, wine, spirit and cider producers. This cross-sector cooperation was unprecedented, and the results have been clear—our industries create jobs, support farms, and bolster community economies. Now we are working together again to prevent your taxes from going up come January 1. Congress needs to hear from the cider community that increasing federal excise taxes will cost. The resources that allowed you to invest in jobs, trees, equipment and innovations could go away overnight. Join us in telling Congress to stop these pending tax hikes and make the savings in the Craft Beverage Modernization and Tax Reform Act permanent.

From coast to coast, producers are making their voices heard. Our industries have two things in common—the vast majority of the businesses in our sectors are small, family-owned businesses, and our fermented products create added value for farms. These facts have led to overwhelming bipartisan support for the Craft Beverage Modernization and Tax Reform Act. But we need to hammer this message home: The loss of these credits will hurt local economies. Congress must act to make them permanent before it’s too late.

Click here to tell Congress that their support of the Craft Beverage Modernization and Tax Reform Act matters for you and your cidery.

Want to learn more about how this bill impacts your cidery? Read our recent blog.