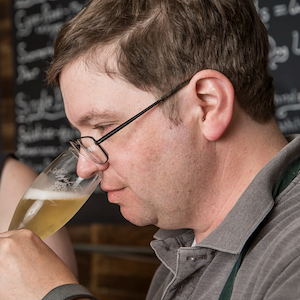 Charles McGonegal started AEppelTreow Winery (pronounced “apple true”) in 2001 as an elaborate ploy to buy his wife more jewelry.  And that’s what he keeps telling her.  Starting with a biochemistry degree from Michigan Technological University, a modicum of food analytical chemistry experience, a burgeoning relationship with a grower of heirloom apples, and carboy of insanity, Charles leveraged a basement cider operation into the smallest nationally distributed cider brand.  Mr. McGonegal practices an esoteric branch of cidermaking; growing traditional bittersweet European cider cultivars and perry pears and exercising the fine art of the methode champenoise.  His pursuit of ‘building cider from the ground up’ has even led him into the labyrinthine mysteries of the USDA Quarantine System, from which he has emerged with even more hard to grow – but flavorful – apples and pears.  Charles has been an active participant in the developing American cider community, as Vice President of the Great Lakes Cider and Perry Association, judge-educator for the Great Lakes International Cider and Perry Competition, contributor to the BJCP Cider Style Guidelines and presenting at cider seminars in Michigan, Pennsylvania and Virginia.  In 2009, AEppelTreow branched into the world of nano-distilling.  In his spare time, Charles is employed as a chemist at a Chicago-area petrochem research company where he entertains his co-workers with amazing tricks in MS Excel, has presented informatics philosophy and implementation to the National Conference of the American Chemical Society and scribbles on the backs of his 15 patents in reactive chromatography and high-throughput catalyst screening.  Indeed, only Charles’ boundless modesty keeps him from world domination.